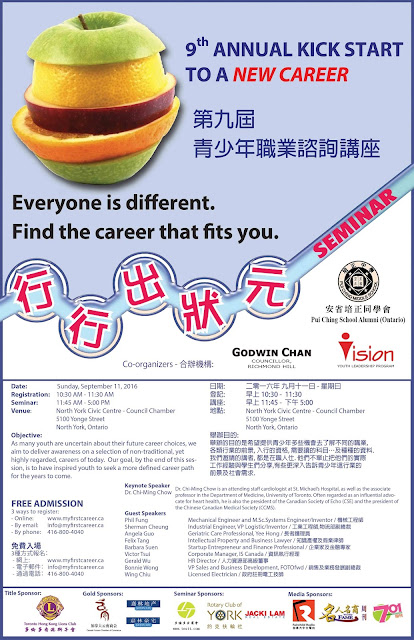 Posted by Vision Youth Leadership Program at 10.9.16 No comments:

From defying gravity at the High Ropes course to racing down the lake in giant Voyageur canoes, Vision Youth’s Bronze and Silver participants were able to conquer fears, discover many first-time experiences, and learn more about leadership and themselves at Bark Lake Leadership Centre in Haliburton, Ontario.

The three-day excursion was packed with exciting activities, on lake and on land, designed to develop teamwork skills and intrapersonal abilities.

Day One featured a grand tour of the large outdoor facility, as well as multiple warm-up and ice-breaker games to help Visioneers get settled in their temporary homes for the upcoming days. After a delicious meal prepared by the Bark Lake staff, Visioneers had the chance to take a dip in the lake to test their swimming abilities.

Later, Visioneers gathered in the main hall to create a list of group and personal goals for the days ahead of them. Many shared plans of keeping an open mind and a positive attitude when exploring new experiences that may be out of their comfort zone.


Throughout the following day, Visioneers took on specialised activities offered by the camp, including kayaking and canoeing, and the high ropes and low ropes courses; many for the first time.
Each of the different activities offered its own set of unique learning experiences- while kayaking offered its own challenges to an individual, canoeing and canoe rescues, done in groups of pairs, required more communication and teamwork.

On the low ropes course, Visioneers were asked to work together to complete different challenges, whether it be lining up on a narrow plank of wood without stepping off of it, passing both people or a piece of rope through a web without touching it, or balancing a large teeter-totter as a group.

Low ropes activities encouraged Visioneers to communicate with one another, ensuring all ideas were considered and attempted. After every challenge, participants were given an opportunity to review and reflect on their communication and collaboration efforts, building upon and improving themselves significantly after each attempt.


High ropes activities challenged Visioneers with solving problems in a tactile challenge, while also overcoming a potential and common fear of heights. Working as a team to belay, spot, and encourage one another through each individual’s struggles, the daunting, yet exhilarating activity was able to bring the best out of everyone.

The evenings concluded the eventful days with spirited, friendly games of Capture-the-Flag and Frisbee, a night hike in dark through the woods to an open ground for a night of stargazing and storytelling, Vision Youth’s annual tradition of performing skits around the campfire, and of course, marshmallow roasting for s’mores.

The final day of the eventful trip was wrapped up with a friendly tournament within the Bronzes, consisting of canoe races and mini games around the camp, as well as an in-depth reflection and debriefs session to review and set goals for the future.

A popular favourite amongst higher-level Visioneers, alumni, and volunteers, Bark Lake has no doubt proved itself the same once again to this year’s Bronzes. Happy chatter and talks of the new memories made filled the buses on the ride back, undoubtedly one of the greatest of their summers, yet!

Check out pictures of our trip posted by our Visioneers on social media under the hashtag #VYatBarkLake!

Posted by Vision Youth Leadership Program at 9.9.16 No comments: 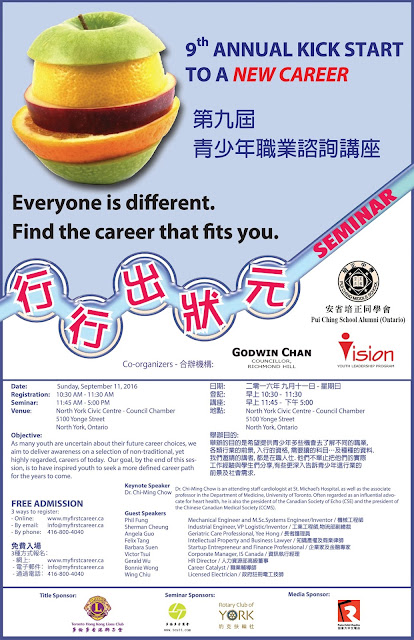 What is Accessibility? Accessibility (in broad terms) is the availability of resources, services and areas for everybody regardless of a person’s condition. On Monday we, Vision Youth, journeyed downtown to the Centre for Social Innovation to learn more about people who face this issue everyday. There, we met Luke Anderson; an engineer who is dedicated to make public areas and services more accessible. He is also...a wheelchair user.

Luke wasn’t always a wheelchair user - in the past he was physically active and an avid mountain biker. It was only until a mountain biking accident where he suffered a spinal cord injury that he needed to use a wheelchair and started to notice that the world we lived in wasn’t friendly to wheelchair users.

During his presentation, we were brought to attention how we lived in a world where it is not very accessible for wheelchair users. He described the many frustrations he faced performing daily tasks and going about his life, most that we weren’t aware until he brought it up and even he wasn’t aware until he had to use a wheelchair. From there sparked an organization he created to address one of the many problems he faced and many other wheelchair users face; the StopGap Foundation.

For many buildings as you may notice, there is a single stair step that one is required to take to entire a store, office building, etc., and because of this step a lot of buildings that have it are inaccessible for wheelchair users. StopGap aims to solve that issue; by building a small ramp and putting it in front of the building it allows wheelchair users access to the building. StopGap has given ramps to many buildings in the GTA and has expanded to other areas in Ontario such as Kingston and Ottawa. Last year we also met with him and he kindly gave us one the StopGap ramps to use - it turns out our Vision Youth office also had this single-step in front of the entrance. Luke described the single-step as one of the many physical barriers society is generally not aware of that is affecting people like him and other people with other conditions.

One of the highlights of our meet-up with Luke is a workshop that he ran with us. He posed the problem of the “Push to open” button that is featured next to many public entrances and exits that when pushed, automatically opens the door for the user. He gave us a challenge to redesign the button (whether the button itself, the wheelchair symbol, etc.) to allow better access for everybody entering or exiting a public place. In the 40 minutes of generating ideas, coming up with a solution, prototyping and presenting it was one of the few moments our group was really into the activity. There was so much conversation and back-and-forth between the kids about how to redesign this button and the longer the workshop was the more excited they seemed to be. It was a refreshing moment to witness teens having this type of energy for designing something for the benefit of others and we hope we could recreate the same feeling for them in future sessions.

We learned a great deal from Luke and had a wonderful experience collaborating with him! We look forward in learning more from him in the near future and open our eyes about the world around us. Check out Luke Anderson and the StopGap Foundation at StopGap.ca

Posted by Vision Youth Leadership Program at 23.8.16 No comments: 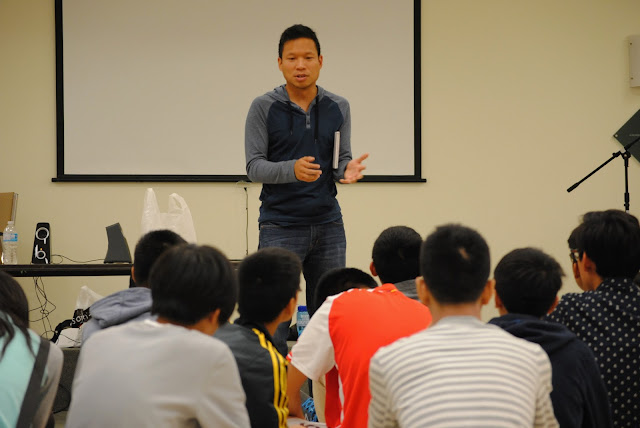 
這四堂課下來，展望學員們從不同的角度去理解與分析不熟悉的角色與情形。在這過程中，大家不但對於­­「不同人面對不同生活困境」這個概念有更多的了解，也對自我和自己在社會上該有的責任擁有更深入的認識。
Posted by Vision Youth Leadership Program at 20.8.16 No comments:


For four evenings, Bronze Visioneers had the opportunity to learn more about self-expression and identity through the “LEAP” program, or “Learning Experiences through Artistic Performance”.
Led by long-time teacher, Daniel Kim, who also has lengthy experience in the performing arts, Bronze Visioneers were encouraged to consider themselves and the world around them through storytelling, performance, and self-reflection.

The basis of the sessions was built upon the main pillars of leadership and identity; history and understanding where they come from; responsibility, accepting differences and diversity; and seeing things from different perspectives.

After establishing basic characters, settings, and scenarios from storybooks, Visioneers were guided through elaborating on simple notions and putting themselves into the characters’ shoes. Exploring issues of bullying, acceptance, family, are more, Bronzes were invited to connect and empathise with the difficulties the characters from the book faced.

Bronzes also considered the many sides to a single story through dramatic tableaus depicting the situations explored. Through the sharing and creation of the scenes first-hand, not only were the feelings of the main character explored, but also secondary and background characters who have impacted vicariously by a single person or event.

Visioneers also had the chance to participate in activities in the role of certain characters. Asked to contribute pieces of advice, write letters, and even gift imaginary presents as if the character from the story was in front of them, many dug deep and reflected on their own selves in order to better understand and help characters from a story.

Through analysing and reflecting on unfamiliar characters and scenarios, Visioneers were able to gain a better understanding of not only different people entrenched in different struggles of life, but also parted with a positive grasp of their identities and the role they play in the world and people around them.
Posted by Vision Youth Leadership Program at 19.8.16 No comments:

Posted by Vision Youth Leadership Program at 13.8.16 No comments: