On 30th July, 2018, the Bronze Visioneers visited the Toronto City Hall and participated in the mock council debate activity organized by the Vision Youth Leadership Program. Franco Ng, who worked as an assistant of a city councilor, introduced to the Visioneers the history, management structure, and daily operation of City Hall, as well as sharing with them the jobs and responsibilities of a city councilor. After this visit, the youths learnt that it is possible for anybody to make changes in their city. Franco also hoped that they would be courageous to voice out their opinion and raise their enthusiasm in taking part in political events.

Apart from visiting the City Hall, the Visioneers were able to experience being a city councilor and the public that speak in the council by having a mock council debate. The topic for the debate was “Should the bike lane in Bloor Street be kept?” The youths were divided into 5 groups and each group took one role in the debate. The 5 roles included cyclists that support keeping the bike lane, residents living near Bloor Street who are either for or against the bike lane, and restaurants and shop representatives that are for or against the bike lane. Franco and other counsellors took the role of the mayor and city councilors, who asked questions regarding the arguments made by each team as well as ensuring that the council meeting was held solemnly and smoothly.  Rationality and creativity were shown in the speech made by each team and they were able to consider the issue from different perspectives. While making a brilliant speech may put one’s stance in an advantageous position, being able to answer the questions raised by councilors with statistics and information can as well make one’s arguments more persuasive, which is more likely to receive more votes from the councilors. 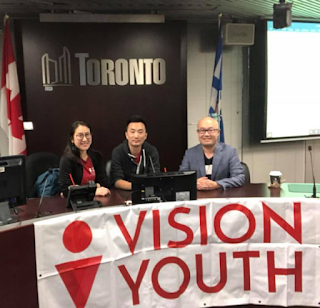 In this mock council debate, more than 2 hours were spent in discussing the motion of keeping the bike lane in the mock debate. In reality, councilors are facing mounting pressure as they need to deal with different opinions and proposals from the public of 44 districts. Nevertheless, after experiencing this mock council debate, Visioneers understood that politics is not a tedious topic to study. Instead, it is a major way to achieve one’s ambitions and make changes in their community. It is hoped that they would get involved in more political events in the future and bring new blood to the political sector.

Founded in 2001, Vision Youth Leadership Program is a non-profit organization that aims to help youths develop life skills, nurture their social skills, and prepare them for a successful future. Different from the traditional teaching approaches which educate them mainly through academic knowledge, Vision Youth emphasizes on exploring the potential of our participants, enhancing their social skills and organizing outdoor activities which allow them to stay close to nature.

Furthermore, Vision Youth provides a good learning experience for the participants, ensuring their communication skills, public speaking skills, leadership skills, interpersonal skills, collaboration skills and self-confidence can be strengthened. It is also our goal that students would understand and love nature better and that their social and political awareness, and personal responsibility can be raised after taking part in our program.

For more information about our past activities, feel free to visit our blog http://www.visionyouthblog.blogspot.ca/. Blog posts in both Chinese and English version are available for readers.
Posted by Vision Youth Leadership Program at 3.8.18 No comments: 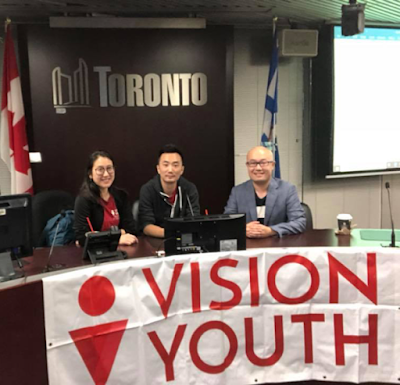