When one thinks about green spaces in Toronto, first thoughts go to municipal parks, dog parks, and small local trails. Most of the younger generation may not even know where Toronto's greenbelt is, and some others might think, "Wait! Toronto has a greenbelt?" (Yes it does exist, including the Niagara Escarpment, and Oak Ridges Moraine). If I tell you to think of a large park, one most likely thinks about Algonquin Park first or even Mono Cliffs Park. Both of those are notable provincial parks. But would you believe that there is a national park less than an hour away from Toronto? Well, not quite yet. Rouge National Urban Park is on its way to becoming a national park. 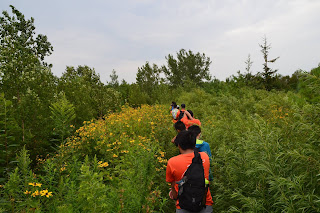 How many of you knew that we had a National park practically in our backyard? We no longer have to travel three hours to see a beautiful view. (Did I mention that from the top of this park, you can see the CN tower, Hamilton, and on a clear day, you can see New York!). The problem is that many people don't know about this park. I wondered why as I explored the wetlands, hills, and native (and invasive) flora and fauna. It is a truly beautiful green park. More people should know about this park and come visit. There was a limited number of people walking the trails, really only the group that I went with. 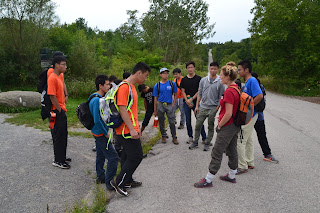 The low number of visitors may be due to the relatively new status of the park. Around 30-40 years ago, Rouge park was a just a gravel pit and waste land dump (a land fill) with no greenery, wetlands, and certainly no wildlife or animals anywhere in sight. In fact, people certainly did not visit and most likely went out of their way to avoid it. However, with the hard work of numerous groups over the years, including Friends of The Rouge, Toronto parks and other volunteer groups (like Vision Youth. Represent!), the barren land was transformed into a lush green habitat. Groups and volunteers are encouraged to contact staff at Friends of Rouge for opportunities to restore and manage the ecosystem. From tree planting to invasive species thinning and many more activities, a lot can be done to help. (So contact Friends of The Rouge http://www.friendsoftherouge.ca/ ) 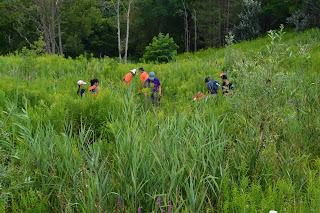 On August 17th 2017, I visited the Rouge Park. During this visit I, along with the group I went with were led by a very capable team of people from Friends of The Rouge and their supervisor Jess. In the morning, we tried to restore the natural flora back to its land. One area was littered with invasive flora that sucked all the nutrients that the native flora needed to grow. I helped to plant more than 70 trees with Vision Youth and Friends of The Rouge (and also took deserving freeze breaks)! Not only did we replant the area with native flora and destroyed some of the dangerous and unwanted invasive flora, I learned about what I did that morning through a hike in the afternoon up bear hill and bear wetlands. The coolest thing to me was to think about all the hard work that was put into creating such a big green space. Every tree I saw during our hike was planted like a volunteer, just like me. 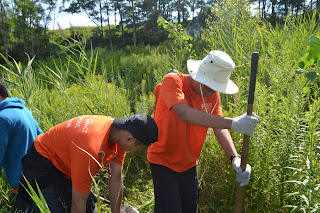 And now even though the trees we planted were mere saplings, in a few years, they will be as big as a couple of trees we saw during the hike. Jess, who also accompanied us during the hike gave lots of interesting information. The invasive species of which we saw a lot of is called, Phragmites. Phragmites is a tall reed like European grass, and can grow in even unfertilized and good moist soil. They over grew even into our gravel road, causing annoyance to humans as they block off our trail. Their height and long roots also make it easier for them to take away all the nutrients of valuable plants. 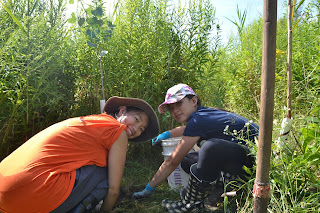 I encourage many people to take the time to go out and visit Rouge Park. There are many new things that can be learnt about a park that is so integral in keeping our air clean, our shores less flooded and our drinking water clean. There are also a lot of wildlife in the area. On a nice hot sunny day, twenty plus turtles can be seen lounging on logs by the swamp. You can see falcons and birds of prey watching over you perched on the lookout posts. And don't forget about the bugs (bring bug spray)! Did I mention that there are painted turtle breeding grounds along the swamp boarder and that Rouge Park is also a home for a handful of approaching endangered type of turtles?
Take a break, get out, and appreciate mother nature at Rouge National Urban Park! 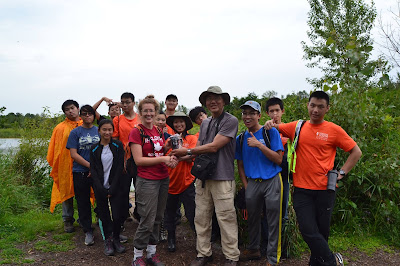 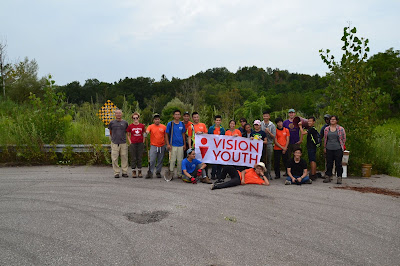 By Sabrina Tam and Hayley Ho

On August 15th, parents of the Visioneers were invited to listen in on a talk held by Mandy Fang on the importance of the emotional states of children. Mandy is a registered psychotherapist and social worker who works for the Chinese Family Services of Ontario, which you can find more about here (http://www.chinesefamilyso.com/en/index.asp). 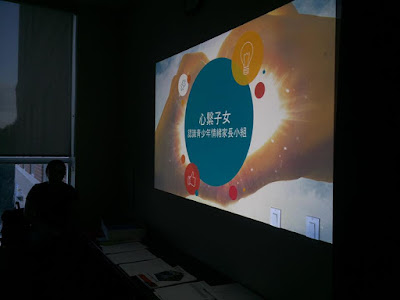 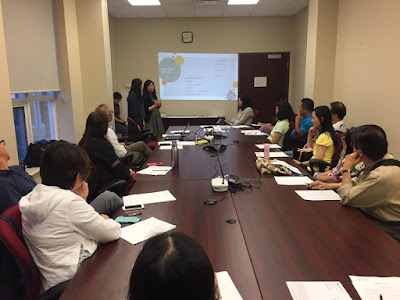 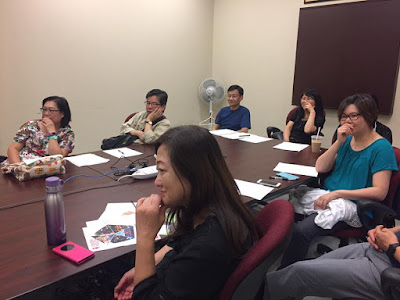 We would like to thank Mandy for her interactive and educational talk on child emotional development, as we have all left learning something new.

We hope to hold more sessions similar to this one in the future where parents can share together and learn more about the psychosocial development of children and how to further interact with their growing teenagers.
Posted by Vision Youth Leadership Program at 27.8.17 No comments:

Once again Bronze, Silver and Gold Visioneers’ 3 day excursion to Bark Lake Leadership Center in Haliburton, Ontario has proven itself to be one of the best highlights of this summer! From day to night, Visioneers were positively challenged and motivated to engage in physical and mental obstacles on both land and water, gaining many first experiences, learning teamwork and communication skills and stepping out of their comfort zones!

Before the start of the many adventures Bark Lake had to offer, Bronze Visioneers settled into their cabins and were also asked to set and share personal goals to achieve in their time at Bark Lake as well as strategies to achieve them. Many shared about hoping to be a risk taker, to challenge themselves, maintain positive attitudes and of course to have fun! Everyone’s tummies and energy for the day were also taken care of by the delicious meals prepared at the center.

The day refreshingly started with Bronze Visioneers taking a cold dip into the lake for a swim test! Throughout, Bronzes had multiple opportunities to be exposed to and participate in a diverse range of activities that were both exciting and challenging, the major ones being kayaking, canoeing, low and high ropes and team building games. Each of these activities were designed to incorporate teamwork elements, like working in pairs or as a group, emphasized on personal growth and outdoor physical skills too.

Low rope activities highly emphasized on clear communication, teamwork and physical challenges. Bronze Visioneers were expected to practice these skills in activities like balancing everyone on a thin plank of wood, rearranging a set of pictures into its correct order while moving their teammates around and standing on a log and passing each other through ropes in different heights and spaces of a web without touching the ropes.

Despite the pouring rain at night, the Bronzes got to participate in a team building challenge called “Building The Incredible Machine”. Different roles were to be played, like one being the project manager, engineer, walking messengers, a blindfolded player and one who could only answer questions in order to build the exact model of the machine. These restrictions pushed Visioneers to learn to communicate in all forms, both verbal and physically, to understand the importance of two-way communication and in working towards a common goal.


Luckily as night fell, the rain has also stopped, leaving behind a clear starry sky of stars for the Bronze and Silver Visioneers to do a night hike to a beautiful beach for star gazing and story telling. 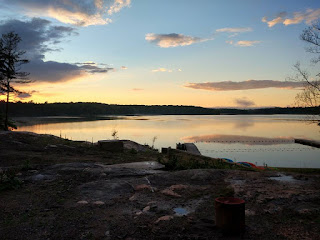 The following day consisted of more exciting land and water activities- High ropes and canoeing! It was great seeing the Visioneers bond closer within their team and individuals taking the initiative to try harder, take up a leader role, to voice out their suggestions and in persevering through tough challenges!

Before walking high up in midair, all Bronzes were to set personal goals in overcoming their fear of heights, being a risk taker and bring a positive mindset in supporting their peers into the High Ropes site. With a lot of encouragements and courage from their peers and counselors, the Bronzes successfully figured out tricky rope courses and many took the leap of faith in jumping off obstacles! 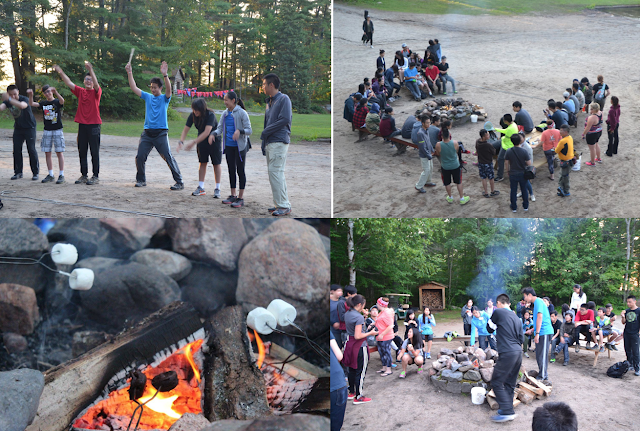 The last day of Bark Lake concluded with the Ultimate Canoe Race between different Bronze teams!! Visioneers could be seen paddling in sync with one another in their teams under the pouring rain among with the sound of loud cheers and rooting. All the teams were welcomed on shore with a long human bridge made by both counsellors and visioneers! 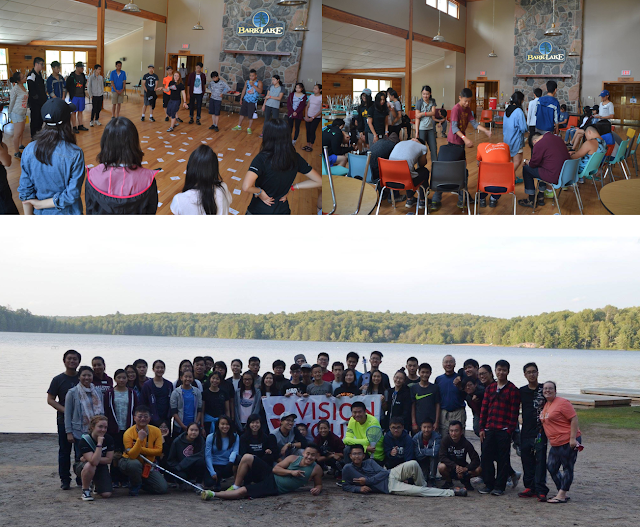 Once again, endless fun and challenging memories were made these 3 days. Thank you Bark Lake for being the highlight of our summer!

Posted by Vision Youth Leadership Program at 27.8.17 No comments: